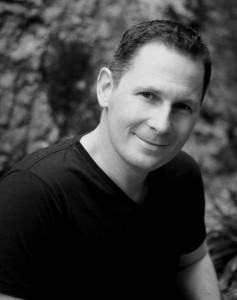 It’s probably fair to say that most authors prefer to write about fictional characters rather than themselves. I certainly belong to this category, so I’ll endeavour to make this as painless as possible.

I was born in country Victoria, Australia, in 1971. Like many writers, I devoured books from an early age. In my case, this was due in part to the late arrival of my siblings: I was ten when my brother appeared and fourteen when my sister turned up.

Since my parents had only moved to Melbourne reluctantly, we spent many weekends driving back to the country. This meant that apart from school, I didn’t get to interact with other kids much during my formative years. Books became my companions instead, and we travelled far together.

After finishing high school, I completed a Bachelor of Economics & Commerce at the University of Melbourne. Graduating in 1993, I set off around the world and didn’t return to Australia until two years later. I settled in Sydney, where I remain to this day with my wife and two daughters.

In May 2001, I was fortunate enough to be awarded a mentorship by the New South Wales Writers’ Centre to develop an early version of my first novel (FIVEFOLD). In the same year, I sold some of my short stories to Australian small press publishers. A childhood dream was finally realised!

January 2005 saw another important milestone: I attended Clarion South, the Aussie version of the famous six-week US residential short story workshop. This amazing, gruelling course accelerated my development as a writer. In the latter part of 2006, I secured a literary agent and FIVEFOLD was published by Random House Australia in January 2008. It was also translated into Russian and released as Code Kabbalah.

In 2013, I joined the John Jarrold Literary Agency on the basis of my second novel, called The Hidden Keystone. This manuscript is currently under consideration and I’m working on my third novel — the first in a new Fantasy series — tentatively titled House of the Half Moon.

(* I know, I know. This list is far too short, but really, where do you draw the line?)

If you got this far, feel free to drop me a line.