It’s almost been 10 years … how did that happen?

In January next year, it will be ten years since I attended Clarion South along with sixteen other writers.

For those who aren’t familiar with the Clarion program, it’s a six-week residential writing course for aspiring writers of speculative fiction. Each week, a new instructor arrives to impart wisdom on the creative process, while the students struggle to draft and submit a new story, in between critiquing the sixteen other story submissions, attending a group critique session each morning, and maintaining a basic level of hygiene. That’s why Clarion is affectionately referred to as ‘Boot Camp’ for SF writers.

Clarion South is the Australian version and it is no exaggeration to say that it changed my writing life. Every other student from the 2005 class that I’ve spoken to since then pretty much feels the same way. 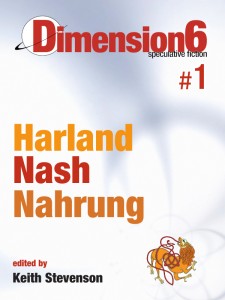 So with the ten-year anniversary fast approaching, it seemed appropriate to throw a spotlight on some of my fellow Boot Camp survivors who have recently released books out into the wild. First up is Rjurik Davidson, whose book Unwrapped Sky, was released today! Check back in a day or two to read what he has to say about the experience of being published.

In other news, Keith Stevenson from Coeur de Lion has just released the inaugural issue of Dimension6. D6 is an epublication and free to download from the CdL website. Featuring some of the finest Aussie speculative fiction going around, it surely deserves a modest donation after you’ve downloaded your preferred file format. Check D6 out – I’m sure you won’t be disappointed. And you can also hear what Keith has to say about the publication over at Angela Slatter’s blog.